2x-10x your business with proven strategies, systems, and tools of a $235 million/year producer

This is what my 2019 personal production looked like. Me and three processors. 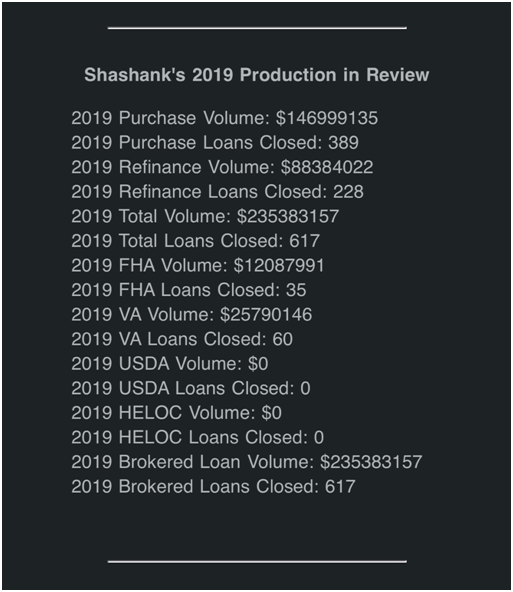 In fact, I am one of the fastest ever to reach $1 Billion in personal production taking less than 10 years – that's an average of $100 million/year.

I got into the mortgage business in 2008. Yes, you read that right – in 2008, when more than half of the loan originators were leaving the industry. I was new to the country as I had recently moved from India.

With a bare $1900 as my starting capital and the kitchen table of my rented apartment as my "office", I officially became an entrepreneur.

The best coaches will tell you that if you are new to a business, work your Sphere of Influence (SOI) first. Well, I had 3 people on that list. And they were co-workers from my past company that had recently filed bankruptcy. So, you can guess, not really in a tearing hurry to buy a home.

In the proceeding 12 months, I closed a whopping 7 loans: that's an average of half a loan a month. Given that it was 2008 and my SOI number was effectively Zero, even 7 loans was a respectable number.

Not respectable enough to feed the family though which made me question my decision. I was qualified enough to command a 6-figure salary in corporate America. So, why wasn't I?

The dream of entrepreneurship, doing something of my own, kept me in the business.

And after trying every strategy that other LOs in the industry were working, and failing at, I decided to start doing things that virtually no one was doing.

I started creating, executing, and perfecting my own strategies, my own tools.

I am a teacher at heart, I guess I got that from my mom who was an elementary school teacher. So, I wanted to teach those "one things that sticks" to hundreds and thousands of Loan Officers who could use my help.

I could have used a ton of that help during my early days.

But I didn't want to do private coaching alone, charge people $2000 a month, and only coach 10 Loan Officers.

I wanted my learnings to reach as many Loan Officers as possible at a price that anyone could afford.

OMG! Should I blog? Do video? Start a podcast? What about First Time Home Buyer Seminars?

I am sure you are asking these questions all the time.

And so we end up doing a little bit of this…a little bit of that. Soon, we're tearing our hair out with all the things we "have to" do - and we're not even sure any of it is actually working!

You can do that. Most of your competitors do.

Or...you could focus on the tried, tested, and proven strategies that actually work.

No more wasted time. No more "try it and see" praying to the marketing gods. Simple, systematic action with clear instructions.

How would it feel to have a clear roadmap of exactly what it takes to 2x your business? Or 5x? Or 10x it?

It's like putting rocket fuel behind the strategies that work…and intentionally ignoring the ones that don't.

You can use these systems to grow your business.

For the first time, I'm teaching the advanced mechanics of growing from an "average" Loan Officer...to a 6, even 7-figure superstar.

If you're ready to grow your business, here's how MLO Master Class will help you:

There is a reason these training are called Master Classes. It's because you get taught by the masters of the game.

Of course, you get all my tips, tricks, tactics, and tools but you also have classes and coaching from some of the biggest names in the industry.

And then you have permanent faculties like Barry Habib; THE biggest name in the industry, and superstar social media trainer Megan Anderson.

You'll even hear from other Loan Officers who are at the top of their game, to see how they do it.

Here's a sneak peek of what you'll learn

Getting More Client Leads and Referrals

Working with and getting more business from Real Estate Agents

Getting 2x-5x done in Half the Time

How to do the Business Planning the Right Way

Probably the most powerful of them all - A monthly series where we deep dive into one or two strategies with top producing Loan Officers across the country. Some of them are so basic any Loan Officer can implement it today. For example – Skylar Welch built a 250 loans/year production in 4 years using a realtor acquisition strategy that you can work on right away.

Plus, I've included these bonuses

Mind you, this is just a sneak peek. The actual member's dashboard has so many more goodies waiting for you.

Is MLO Master Class right for you?

I believe in being very candid about who's right for this course…and who's not. If you're on the fence about this, you should not join.

The Loan Officers who are ready to take their business to the next level — and are ready to invest a serious amount of time and a little amount of money — will know this course is transformative because of the incredible value they can get.

If you're working harder than ever, but not seeing commensurate results, this training will help you to rapidly unlock the next level of your business.

Here are 2 reasons "MLO Master Class" might NOT be right for you.

1. You think this is a Get Rich Quick scheme

While you will learn from my dozens of mistakes and only get to work on tried, tested, and proven techniques, this in no way means that you will see that kind of growth immediately.

There are several pieces of training which will help you quickly increase your production but if you are ambitious like me and want to grow your business several folds, it will take time.

This is not a get rich quick training.

2. You think this is a done-for-you program

While the strategies, the tool, and coaching are done for you, the work is not.

If you are a lazy Loan Officer who believes this is the next shiny object which will miraculously increase your business with little to no work at their end – you are mistaken.

This will require work, a lot of work. I will ask you to get out of your comfort zones a few times to implement some of the tactics.

While some require only a little bit of work, more impactful ideas may require more work.

Irrespective, if you are not ready to do the work, you should NOT join MLO Master Class.

I hate lazy people and I do not want them to be part of my program.

I'm thrilled to take my 10+ years of business success and compress some of the most valuable lessons into this course on growing your business. Why not give yourself every advantage you can?

Instead of thinking about the costs, think about the VALUE.

What is it worth to you to learn my proven strategies, tactics, mindsets, and systems for becoming a top producer? (I charge $2,000/month for personal coaching and rarely accept 1-on-1 clients, so this course is the ONLY way to learn and build off of my experience.)